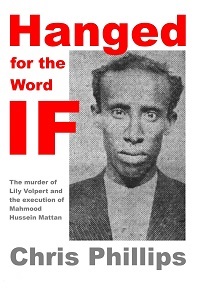 In 1952 a shopkeeper named Lily Volpert was murdered in the docks district of Cardiff, known as Tiger Bay. A Somali former merchant seaman, Mahmood Hussein Mattan, was charged with the murder, convicted and hanged. But 46 years later he became the first person in British history to have a murder conviction overturned after being executed.

"Hanged for the Word If" is the first book in English about this historic case. Drawing on all the available documentary evidence, including the surviving records held by the police, it tells the story of the crime, the investigation, the trial and the execution. It traces the later history of some of the people involved, and relates how another murder and an attempted murder raised doubts about Mattan's guilt. It describes the campaign to reopen the case in the 1990s and the appeal that overturned his conviction. And finally it tries to answer the question of who really killed Lily Volpert in 1952.

Please follow the links above to read sample extracts, or to buy an eBook (PDF) or printed copy.